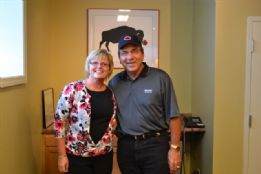 A former baseball player for the Cincinnati Reds from 1967 to 1983, Bench is widely regarded as one of the greatest catchers in Major League Baseball history. He was a key member of the Reds’ 1975 and 1976 World Series championship team known as “The Big Red Machine.” Bench was inducted into the Baseball Hall of Fame in 1989. Bench is a spokesman for one of our customers and a friend of our Chairman.